I’m all about the pumpkin lately 🎃 well it is fall after all. These cookies turned out so soft and chewy, definitely a new favourite! Recipe below.

Preheat oven to 350ºF. Combine all dry ingredients in large bowl and set
aside. Beat together coconut oil and coconut sugar until smooth, add egg
whites and vanilla and beat together, add pumpkin puree and beat again until
smooth. Fold wet ingredients into dry ingredients until just combined. Stir
in pumpkin seeds and chocolate chips. Portion cookies onto parchment lined
baking sheet and bake for 10-12 minutes. Cool on wire rack. 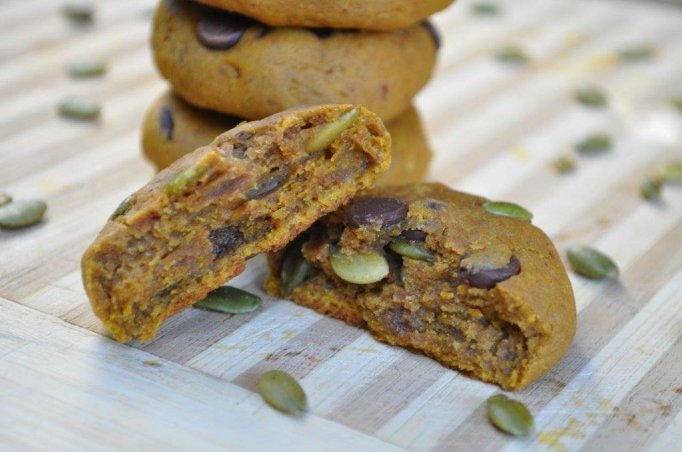 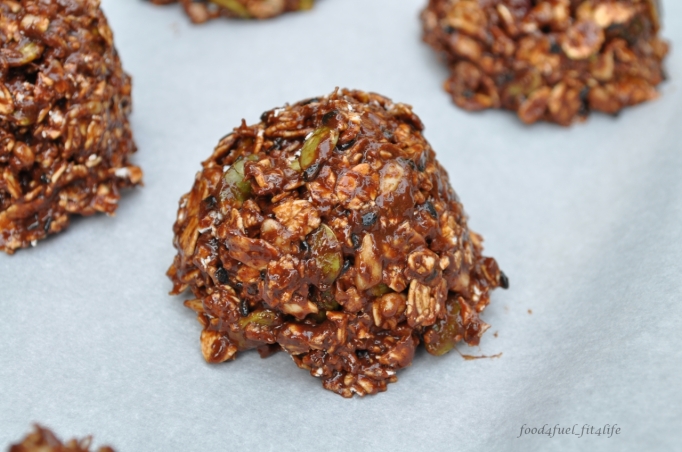 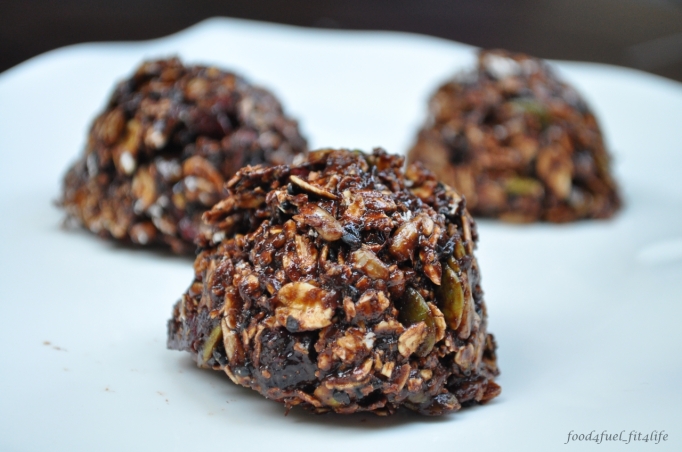 With back to school on the horizon LeanFit asked me to create a yummy snack that is completely nut free, under 8 ingredients and refined sugar free; challenge accepted! These are the perfect little snacks for you to pack for your children’s lunches and of course for yourself. With very minimal ingredients they are quick to whip up, no cooking required and delicious!  Step by step instructions as follows and the recipe is at the end of this post.  Hope you enjoy!

Get all your ingredients together. 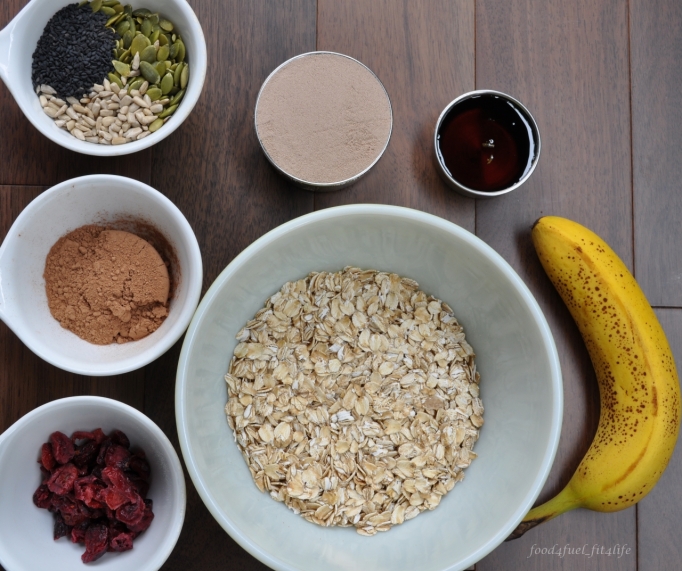 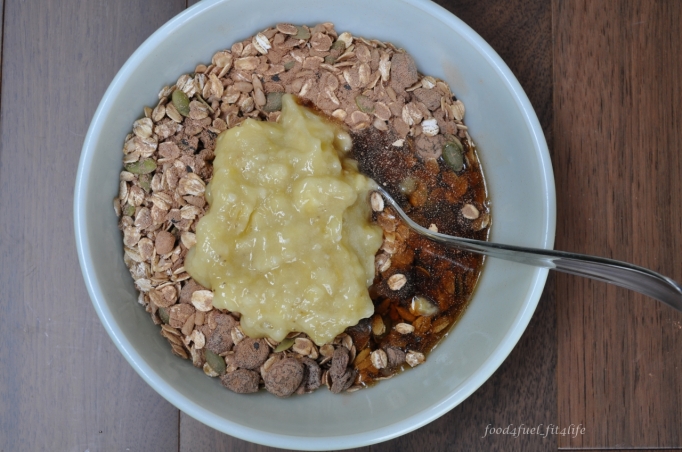 Mash it all together.

If too dry add a little water. 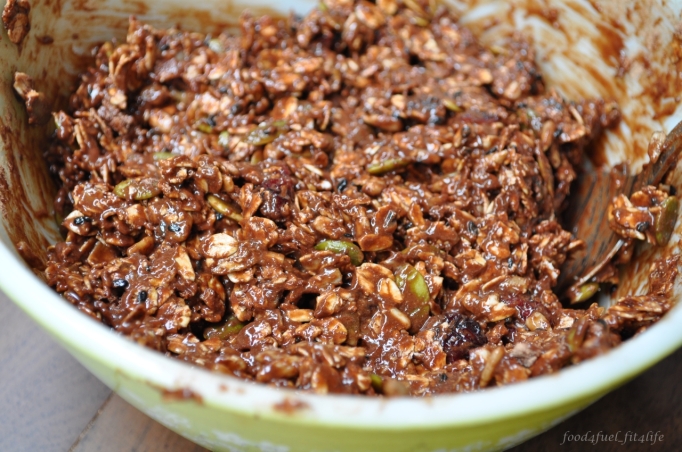 Place in Fridge to cool.

Combine oats, seeds, cacao powder, chocolate whey and cranberries; stir together until combined. Add maple syrup and mashed banana; mash together until well combined, add water 1Tbsp. at a time if too dry. Portion out onto parchment paper using ice cream scoop or ¼ cup and place in fridge to harden. Yield 10 orbs. Stores for 1-2 weeks in fridge or up to 2 days at room temperature.

This cookie is to die for! Best eaten fresh out of the oven with a scoop of your favourite ice cream! I used two 5″ small cast iron skillets but a standard large cast iron skillet will work as well. Alternatively you could use a 8×8 glass baking dish and slice into bars. I also added LeanFit completegreen protein powder for extra protein and VitaFiber IMO syrup for extra fiber. So happy with this recipe, definitely going to make again soon! 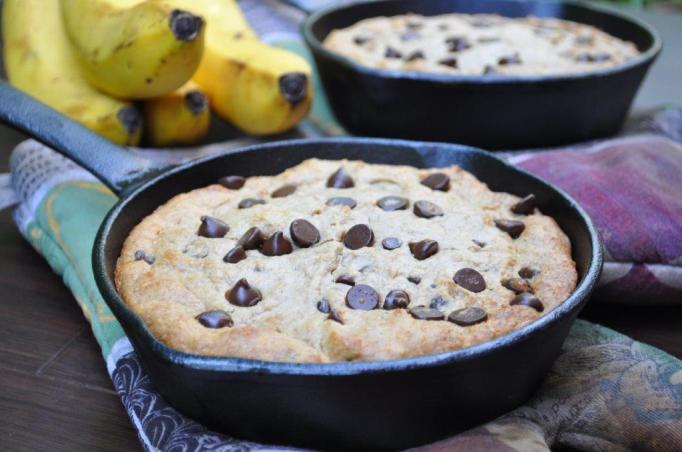 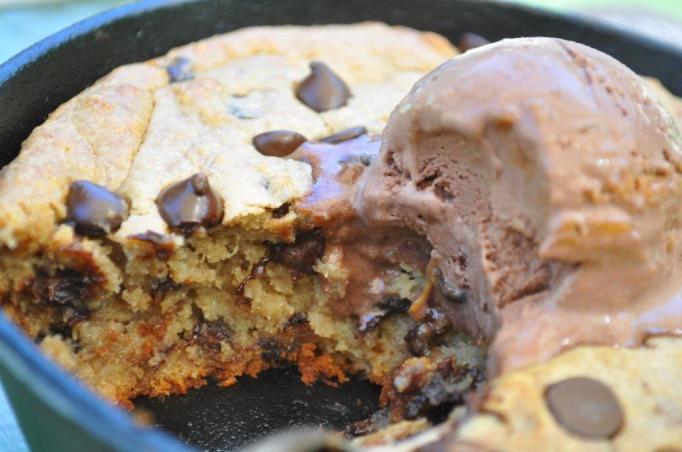 *Update – I remade in my large cast iron skillet and turned out great!

Happy Valentines Day ❤ Protein donuts for the win! I used beet juice to get the red hue in these beauties 🍩 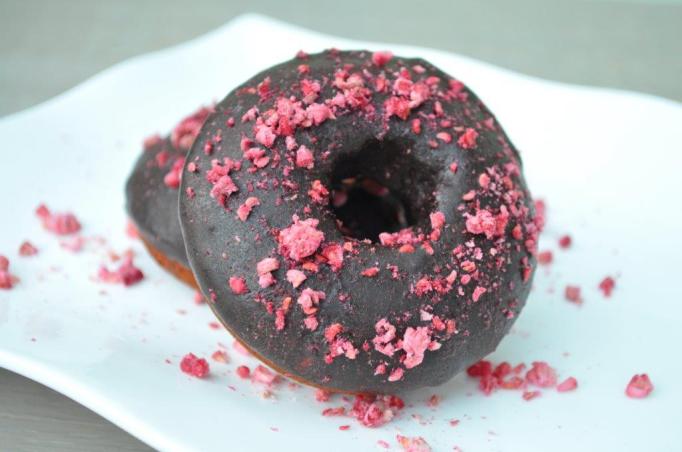 •1 Tbsp coconut water (can sub milk of choice or water)

Preheat oven to 350ºF. Grease donut *pan. Combine all dry ingredients in large bowl. In separate bowl whisk together all wet ingredients and add to dry, stir until just combined. Place batter into large Ziploc bag and cut the corner to pipe into donut pan. *Bake as per notes below. Let cool completely before icing.

Donut toppings: For half I used just plain melted coconut butter and for the other half I used equal parts of coconut oil & cacao powder and added VitaFiber syrup to my sweetness liking (can sub honey, maple syrup, etc.) and then sprinkled with freeze dried raspberries right away. Feel free to use whatever you desire.

Looking for some healthy, guilt free fudge that is high in protein? Look no further these little gems are bomb 💣 I revamped one of my old recipes and they are just as good! Must try! 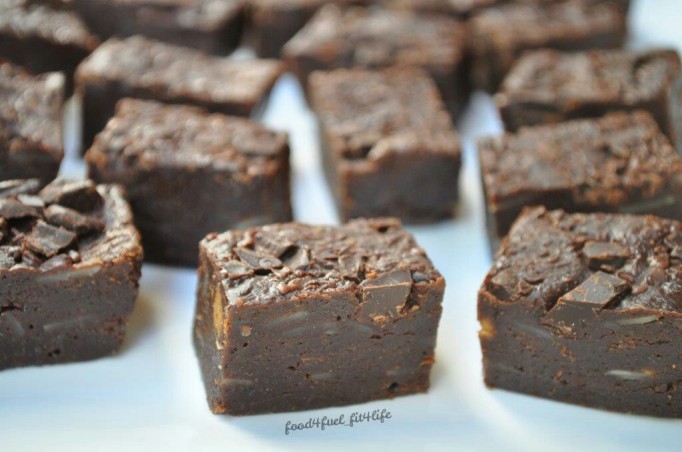 Line a loaf pan with parchment paper and set aside. In medium bowl combine protein, cacao powder, almonds and salt and set aside. Melt your almond butter in saucepan and combine with coconut milk and VitaFiber or other sweetener, then mix into the protein mixture with fork or spatula and combine well. Press and spread evenly into prepared parchment lined loaf pan, sprinkle with chopped chocolate and press down. Place in fridge overnight or flash freeze for 1-2 hours if you can’t wait. Slice into 24 squares.

Try not to eat them all! 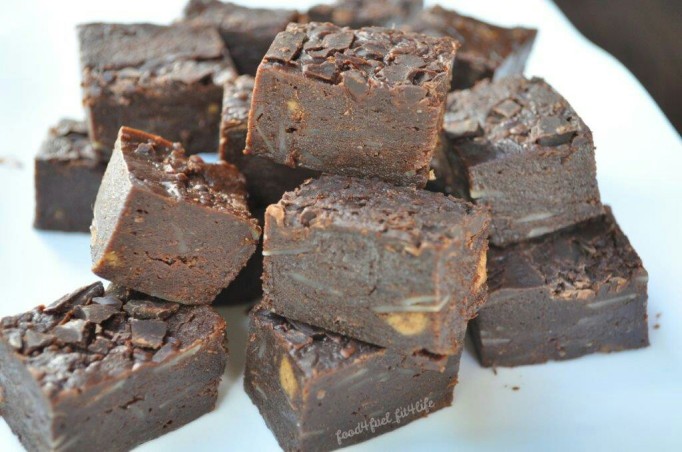 1. Prepare 12 mini muffin liners in pan. In double boiler melt chocolate and coconut oil. Divide equally between the 12 cups bringing chocolate up the sides half way, place in freezer to harden.

2. Prepare center ingredients in small bowl, mash together with fork until you get a dough like consistency, equally make 12 small balls with dough (if you have hard PB heat up in small saucepan slightly). Remove chocolate from freezer and place 12 dough balls in each cup, pressing down flat.

3. Prepare top ingredients in double boiler until smooth, divide evenly over top of 12 cups. Sprinkle with shredded coconut, chopped chocolate or cacao nibs if desired. Place in fridge or freezer to harden then remove liners. Store in fridge. 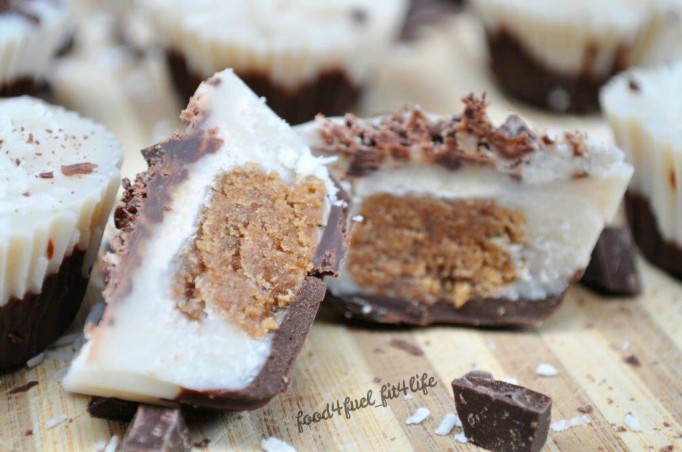 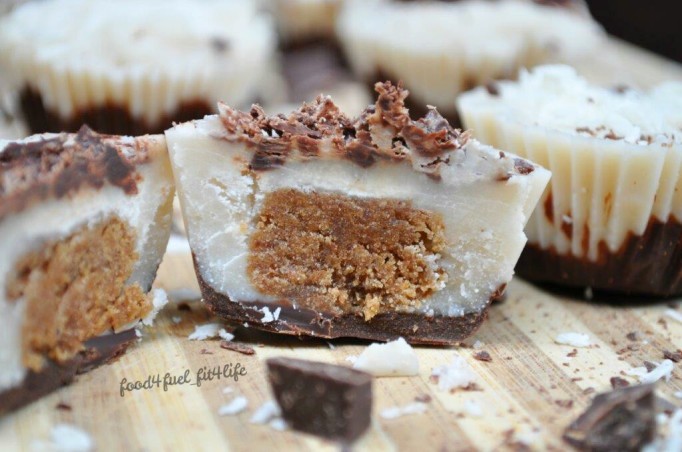 Today’s recipe inspiration comes from ValentinaBallerina on Instagram. I added some LeanFit whey protein, almond flour, VitaFibre and cinnamon to the crumble, chia seeds to berries and adjusted measurements to my liking. 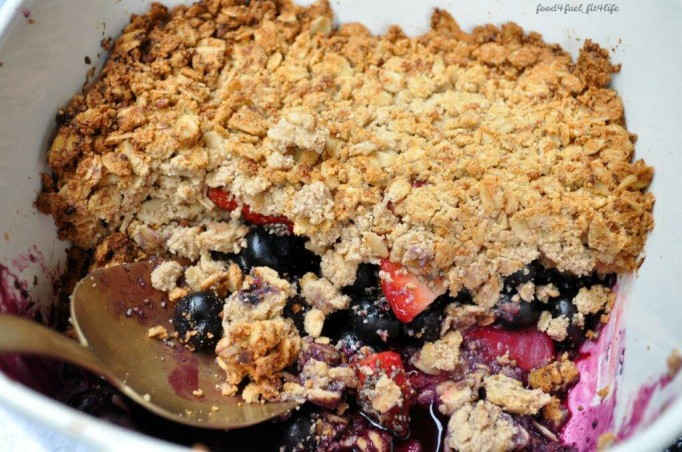 Look no further here is the recipe ⬇

Method:
Preheat oven to 375ºF. In a glass baking dish (at least 1.5 litres or 8×8)
line half of sliced strawberries on bottom, top with blueberries and then
remaining sliced strawberries. Sprinkle cinnamon, Xylitol and chia seeds over berries (alternatively you can toss all in bowl with some freshly squeezed lemon). In bowl combine all dry ingredients, pouring coconut oil in once all dry incorporated then mash together with fork until you get crumbly texture. Spread crumble mixture over berries and press down slightly. Bake in preheated oven for about 20-25 minutes. Let cool for 5-10 minutes and serve with greek yogurt and extra berries if desired. 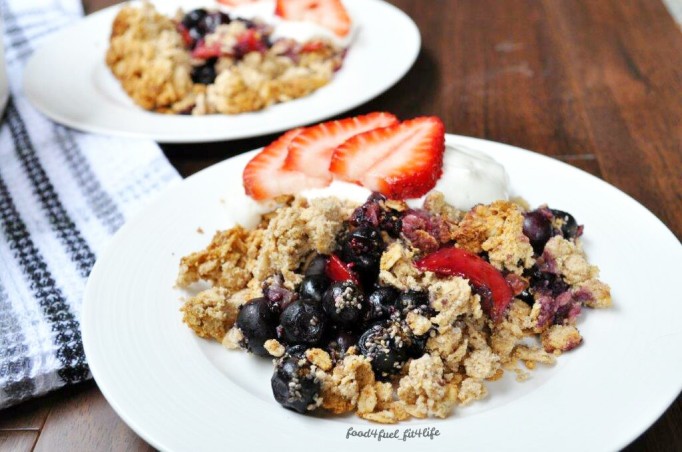 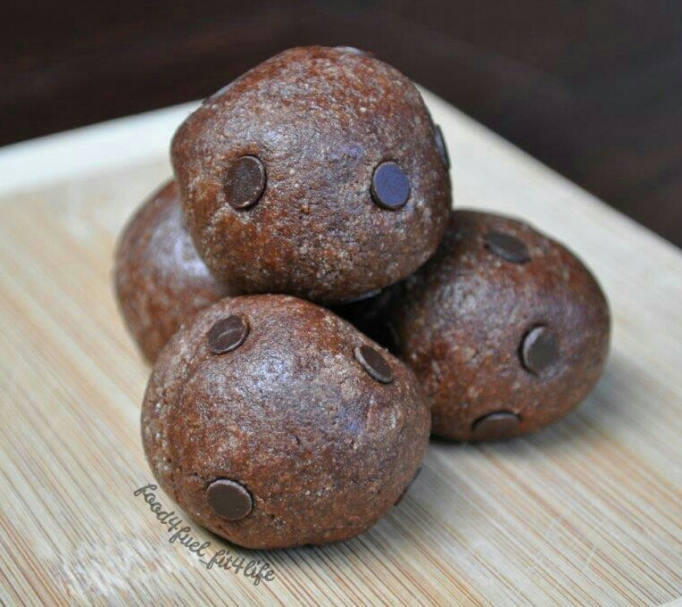 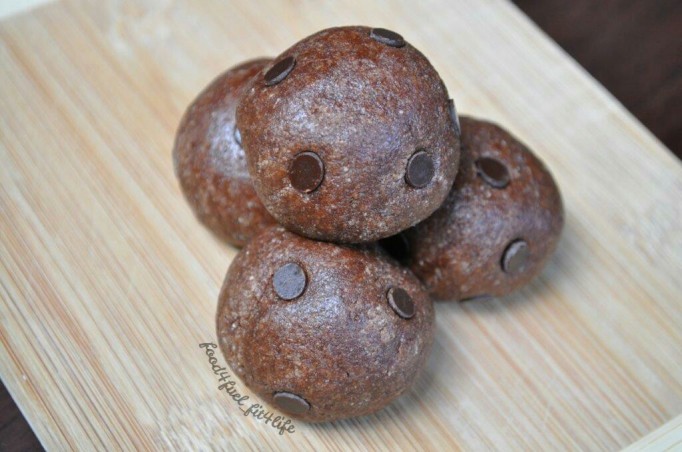 I also made them with Vanilla LeanFit Protein and rolled in shredded coconut. My new favourite go to protein ball!! 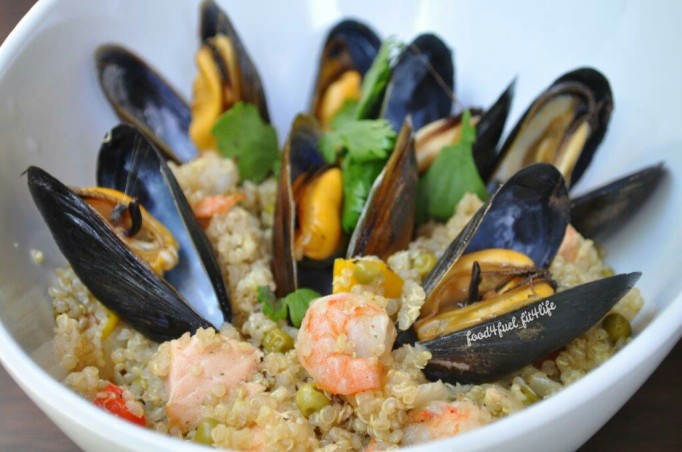 I’m lucky enough to live in the west coast and have an abundance of fresh seafood around and as soon as I seen the mussels in the store I knew I had to make a paella (plus they were dirt cheap! $6.50 for about 30). I had some shrimp and salmon in my freezer that I thawed out to add to this yummy and healthy dish. I also used quinoa instead of the standard rice that this dish usually has. Recipe below ⬇

3. Heat oil in a large paella pan or large high-sided skillet over medium heat. Add the bell peppers, onion, mushrooms and garlic and cook stirring until fragrant 2-4 minutes. Stir in broth and salt; bring to a boil. Add quinoa and stir just to combine. Reduce heat to a gentle simmer and cook uncovered for 10 minutes, stir sides in and cook for about 5-10 minutes more until liquid absorbed, stirring every few minutes. Add peas
once liquid is absorbed, stirring in gently.

5. When the quinoa is done, remove from the heat, and add the seafood plus any accumulated juices over the rice, add mussels on top and sprinkle with fresh cilantro. 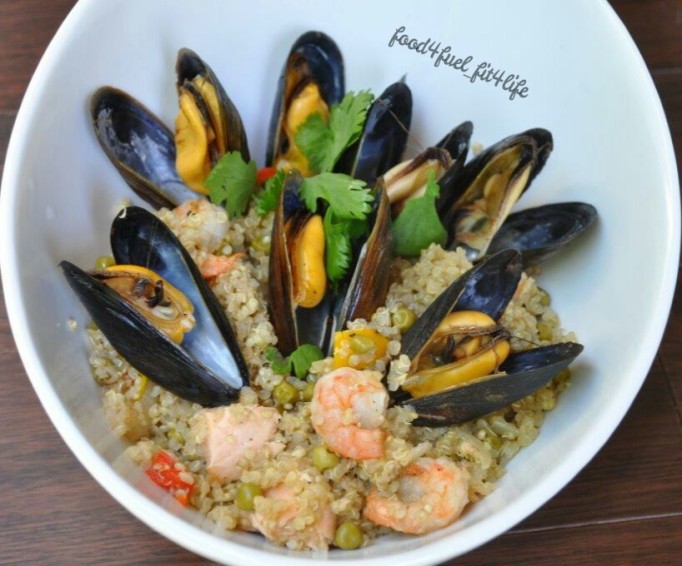 Looking for a way to spice up your quinoa? I know it can be pretty bland by itself so I like to mix it into salads or make a large batch and have meal prep done for the week! It is also a great pot luck dish. Recipe below!

•½ jalapeño, seeded & minced (keep seeds if you like spicy)

Cook quinoa with water and let cool for approximately 2 hours.  Prepare all vegetables and mix all remaining ingredients together with cooked/cooled quinoa. Rest for about 30 minutes or longer for flavours to develop (best overnight). Top with avocado, salsa, greek yogurt, cilantro or whatever you like! Enjoy. Makes a lot! I would say it would make at least 8 servings.